Book Direct with the Owner at Toowoomba Railway Station, Memorial Honour Board with Accommodation VIC in Toowoomba, for all your Attraction and travel needs.

Stroll to the northern end of the platform at heritage-listed Toowoomba Railway Station and you'll find a record that leaves no doubt about the impact WWI had on the locality's population. The Roll of Honour, 1914-1919, Queensland Railways Toowoomba Employees is a magnificently carved silky oak honour board with an impressive listing of 560 names in gold lettering on cedar panels. Railways Commissioner Charles Evans, a former Toowoomba railwayman himself, unveiled the tribute on 14 April 1918. Prime Minister Billy Hughes had stood on the platform in October 1916, urging enlistments. The honour board was artfully crafted at the North Ipswich railway workshops, now the Workshops Rail Museum. Detailing includes columns crowned with decorative motifs of the Queensland Railways emblem, scrolls and shells, and the Australian Coat of Arms. Toowoomba Railway Station, which opened in the 1870s, was still a bustling centre for trade and travellers. Today, the Westlander passes through, between Brisbane and Charleville twice a week. 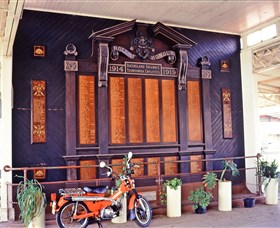 Accommodation VIC welcomes Toowoomba Railway Station, Memorial Honour Board in Toowoomba QLD, we offer an experience that takes you on a journey of a life time in Toowoomba. For all your attraction and things to do, book your adventure today.

Is Toowoomba Railway Station, Memorial Honour Board in Toowoomba your property on Accommodation VIC, please claim your listing and subscribe to update your contact details and receive your phone calls and emails from your clients.

Why is it important toClaim my Listing